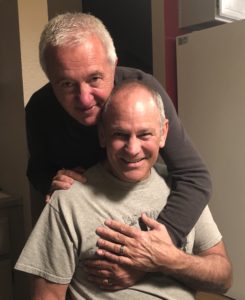 There have been thousands of good and even great books written on the topic of communication in relationships. I want to share my own story about how my husband, Jim, and I have learned to keep our communication open for most of our journey together.

We began our journey together in June of 1988. It was the third weekend in June at the Salt Lake City Arts Festival. When Jim and I shook hands I got goosebumps from head to toe and instantly and felt a deep connection.

In September we spent Labor Day weekend together at Flaming Gorge, where I learned Jim had felt the same deep connection I felt with him at our first meeting. A week later he invited me on a weekend road trip. Little did I know, he was going to visit his family in Northern Utah. We talked along the way to meet his family beginning with siblings; then his grandparents and finally his parents. I was so happy to learn more about Jim through his family.

The next Friday he called me and asked if he could move in with me on Saturday.  He needed a place to stay until he could find a place of his own. I was excited to spend more time getting to know him, so I said yes. On September 17th, just two weeks after the Labor Day weekend (our first time together) he moved in with me and now, after almost 31 years later, we are still together and can’t imagine life without each other.

Like most intimate partnerships we had our share of ups and downs, and in our fifth year we had become strangers to each other. We worked long hours and spent almost no time together to communicate. When one would bring up a subject that needed attention the other would become defensive and try to turn the blame for the problem back on the other. It was a dark time and I knew I could not continue to live with the every-day frustrations of non-communication. I knew that I loved him and wanted our relationship to work, but every day it seemed to be more impossible to agree on anything.

How To Handle Disagreements?

I thought about my parents and how they handled disagreements. They lived 60 years together before my father passed away. I also remembered things I learned about communication from mentors like my grandparents, Stephen Covey and Wayne Dyer. I suggested to Jim that we carve out time to at least discover if we wanted to both stay together. Before we began our first conversation I needed to change the defensive spirit that occurred every time we talked. So, I suggested we begin with a “Ben Franklin Balance Sheet” – Drawing a line down the center of a page, then listing pros on one side and cons on the other – then weighting them to determine which side would win.

At the end of that process we discovered there were more reasons to stay together than to end the relationship, so we agreed that leaving was not an option. We agreed to work through everything that came up, but we had to establish ground rules of communication that worked. After a long discussion we agreed to the following:

At first, we struggled through this new process because we both had to learn how to listen rather than form a defense as the other was speaking. Over time we learned how to communicate issues when they arose during the week rather than wait until Tuesday night. That meant Tuesday’s became a fun night together without interruptions. When we semi-retired two years ago we found we are now spending 60-80% of our time together, so Tuesday has evolved to become a social date day/night. We try to spend quality time together with our friends and family on this day.

The Five Faces of Intimate Relationships

The fact is that any of the three can work but only if the belief systems of both individuals can allow for compromise on the other two. Jim and I have had compatibility in four out of the five faces all of the time, and five out of the five most of the time because we learned where we could compromise and where we would not. Thankfully we each had a similar childhood and young adult background so the areas of compromise are in sync with each other – However, it has not always been easy to compromise on some issues. It took time for us to work through them. I have discovered other long-term relationships have had similar issues where compromise became necessary.

You can read detailed questions for the 5 Faces of Relationships when my book is published, or if you engage with me to learn more. I will include a summary below:

The important thing to remember is that each of us has our own unique perspectives, and regardless of how anyone feels about your perspective you have the right to be respected. As long as what you believe and how you behave does not harm anyone or anything you have the right to pursue it. Making our relationships stronger requires effective, open communication without judgment. If you have questions please let me know. I wish everyone the best relationship possible with their partner/spouse and with everyone else in their lives.

My book on the 5 Faces of Relationships will be published later this year – if you wish to know when it is published please send me your name and email using the form below. If you wish to engage with me to help you understand your own relationship send me a message by clicking here.