Since her graveside service on April 19, 2008, I have intended to publish a tribute to her, but have not yet completed the task to my satisfaction, and also feel that since it contains a large body of biographical information, I want it to be as accurate as possible, so I want my Mother, and her living siblings to review and edit it before I publish it.

So, on this 94th anniversary of her life I want to put a few notes on record about her, as a birthday gift to one of the most influential persons in my life – a woman whose spirit still lives on in me and hundreds of other people whose lives she touched with her unconditional love, and example of pure charity.

She was born, August 13, 1914 in in Montreux, Switzerland and named Marie Madeleine Chevalley. She was the first born child of three, a boy and girl, who both preceeded her in death (more details to follow in the tribute later). After graduation from school in Montreux, she met and married a German citizen by the name of Henry Schroemges.

Madeleine had many challenges and painful experiences in her life before 1950. The details of these experiences shared later in my tribute will show that it is possible for a person to go through such experiences and still become a person with so much love to give, that her mere presence in the room brought happiness to everyone!

As a child, she was a true “Cinderella”. Her mother showed no love for her while doting and loving on her younger brother and sister. She was often left to clean the house when the family would go out for recreation. Even in her older life, when I became acquainted with her mother (my great grandmother), it was clear she had no desire to show love or affection to Madeleine.

In her marriage to Henry, she gave birth to seven children, four boys and three girls. They tragically lost two of the boys before they reached their first year of life. Four of the seven were born in Switzerland, two in Germany, and one born in the USA after they immigrated.

In 1940, because of Hitler’s reign, and because Henry was a German citizen, none of the children could be Swiss citizens – and the entire family (Henry, Madeleine, Jean Pierre, Henriette Edvige, and Cyril) decided that since life was so difficult in Switzerland they would go to Germany, and were promised that grandpa would not be drafted into the army, and he would have a job. Within weeks of entering Germany, Henry was drafted into Hitler’s army, and taken to the front lines. For the next seven years, Madeleine had to work to feed her children and keep them safe and warm. There were times they only had dandilion soup and potatoes to eat for weeks on end. Being homeless at times, they stayed in monestaries, and hostels doing everything they could to survive. In the midst of all of this hardship, after the USA entered WWII, many of the places they lived were bombed, and by the blessings of heaven the family was always spared injury and death. It was during this time that Gerhart and Monique were born. Gerhart lived only 6 weeks.

After the war ended, Madeleine took her family back to Switzerland where her family lived, but could not find word about where Henry was, and for 2 years they thought him killed in the war. She never gave up hope. At the end of the war, Henry got in touch with his mother and the family found he was a prisoner of war in Italy. Through efforts from a former employer he was released and repatriated to Switzerland to join his family. Soon after his return, because only Madeleine was a Swiss citizen, (Henry and Monique were German citizens, and the rest of the children were all without citizenship in any country), they decided to look for another country.

During their search, and failed attempts to immigrate to other countries, the Mormon (Church of Jesus Christ of Latter-day Saints) missionaries found them. The missionaries promised to sponsor them to immigrate to the USA if they became members of the Church, so Madeleine and Henry and all of the children over the age of 8 years were all baptized. Not long after (in 1950) they were on their way to the USA. Once again, they left Switzerland with only the clothes that would fit in a suitcase for each person, and a few personal items.

They settled in Orem, Utah, and were able to start their lives over again. In 1953, Beverly Christine was born. Madeleine was a bit of a prisoner still, as she worked for JC Penny and Sears in her basement as a contractor making custom drapes and curtains. Henry never allowed Madeleine to learn to drive or obtain a driver’s license, and although the children went to school to learn English, she was very alone in her world of work and limited travel – so she learned English by listening to the radio, and learning from her Children.

Despite all of the barriers in her life, I remember as a young boy, her completely giving and sweet nature. She only had good things to say about people, and when my Grandfather’s temper flaired (which was often), if directed at her she would humbly listen and not react until his temper settled. If his temper flared at me or anyone else, in the aftermath she would take us in her arms and hold us until the fear and hurt passed.

An illness as a young woman left her completely deaf in one ear most of her adult life. She would often retire to bed early, while the family was still being loud and boystrous with our jokes and stories. She would say “party on – I can lay on my good ear, and sleep like a baby”. This is just one small example of how she turned adversity into advantage at every turn in her life.

After my Grandfather, Henry, passed away in 1972, from injuries sustaned when his car was hit by a train, Madeleine mourned his loss for serveral months. Then, in early 1973, at age 59, she took her driving test; and with help from her daughter, Monique, she bought a car and began a new life. She sold the home that held so many memories, good and bad, and purchased a trailer house not far from her home. She got a job with General Nutrition Center (GNC), where she worked until 1975, when she took a job as a waitress at the Elks Lodge in Provo. This is where she met Armand Eggertsen (we called him “Squint” – yes, there a story there I’ll tell later), and later married him in 1979. They had a very happy loving life together, until his passing in 1987. We (her family) were all happy she had finally found the happiness and freedom she had so long deserved. They were avid golfers – 2 or 3 times each week during the summer, and went to the spa/gym together during the winter months.

After Armand passed, she let the home go back to his Children, and purchased another trailer in the same park she had lived before, where she lived alone until she became ill in late 2006, and her son Cyril helped her sell the trailer and move into the East Lake Care Center (now named Rock Canyon Rehab and Care Center).

She had a shaking disease called “Essential Tremors”. In the last few years, it presented in her face, and voice and hands. She became unable to write, and her voice waivered so much she stopped speaking except to say yes, or no or give a very short answer.

When she lived alone, she went to the Golden Age Center in Orem, where she was a server for lunch every week-day. Then after lunch, she would dance with anyone who wanted to dance. She made many friends. Two of them paid tribute to her at her graveside memorial, and were grateful for her influence and bright spirit every day they saw her.

I had the privilige of living with her while attending the Utah Technical College in Provo in the fall of 1974. We became intimate friends, and this was the time I learned so much about her life that I have described in summary above. I also lived with she and Armand in their home in Provo for several months while attending BYU in 1980, and was so happy to see them together living a wonderful life.

Over the last few years I have only been able to see her once a year at reunions. Her son, Jean Pierre, brought her to my parents 50th wedding anniversary in August of 2005, where she danced with every man in the room, including me, until we were out of breath, while she didn’t even break a sweat!

Her shining example of unconditonal love is one for the history books. It is amazing how a person can go through so many challenges and have so much pain in her life, and still be a light so bright that everyone is always happy to see her. 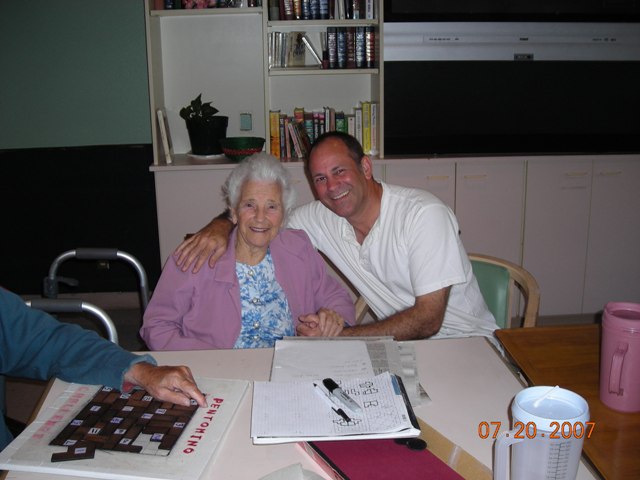 The last time I saw her alive, was July of 2007 (picture above). We stopped in Provo at the Care Center on our way home to Napa, California from Vernal, Utah. When we went into the Center and asked for her by name “Madeleine Eggertsen” it didn’t ring a bell. As I began to describe her as the 5′ woman with the French accent the attendant said, “You mean Grandma Light! She is better, so she has been moved to another wing.” When we found her, she was sitting at a table with a gentleman who was playing a game he had invented. She was teaching him French. Her handwriting appeared normal, and she and I talked for about an hour in French and English. She spoke more clearly than she had for several years, and I felt certain it may be the last time I would see her on this physical plane. She held my hand, as she always did, and stood and blew me kisses as I left, as she always did.

I miss you, Grandma. I love you, and thank you for the way you taught me to love. I hope that this message of unconditional love reaches millions of people and helps them see how possible it is to face painful adversity, and in the end become a light to the world.