This one’s going to be my best ever.  Like I’ve been told hundreds of times – great wine takes great fruit.  This Chiles Valley Petit Sirah is AMAZING.

2010 has been an interesting year for grape harvest because it has been the coldest summer on record.  Verasion didn’t start until late in the year.  Petit Sirah is typically harvested late (mid to late October) in a “normal” year, so I fully expected this vintage to be even later, so we planned our vacation for the first 10 days of October on the bet we wouldn’t harvest until the end of the month.  Then the first week of October Napa had unseasonably hot days for over a week – so the fruit jumped in sugar to nearly 26 brix in just a few days. 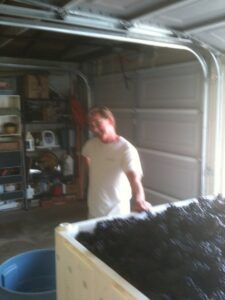 I instructed the vineyard owner to pick the fruit and put it in cold storage until we got back from vacation, and sent notice to all those interested in helping us with crush that it would be on Saturday, October 16th.  I initially had a big response, but the crew ended up being myself, Jim, our next door neighbors Kent and Tracy Lynn, and our friend Toni Renee.

The fruit was delivered in 1 ton bins so that I could use them for fermentation (rather than using 55 gallon food-safe containers).  I received 2015 lbs of fruit on Friday the 15th at 4:30pm, and started the setup for crush.  I discovered the fruit had some mold on it, and there was some rasining of grapes, but overall the fruit looked and smelled wonderful.  I sprayed some potassium metabisulfate solution on the grapes in both bins hoping the mold was only on top of the bins.

I picked up the rented hand-crank crusher from Napa Fermentation Supplies in Napa at 10am on Saturday the 16th, and the crew was ready for crush by 11am.  We crushed and sorted until 5:30pm, and by 6pm cleanup was done.  Thanks to the crew for all their hard work, and for picking out the raisined fruit, leaves and big stems that the crusher/destemmer missed.  Each of the 2 1-ton bins contains a little more than 1/2 ton of must.

I added 40PPM (10g) of SO2 to each tank to kill the mold, and stop the natural yeasts from starting fermentation, and covered the bins for 24 hours.  FUTURE NOTE TO MYSELF: The pH is a little higher than 3.5 so I could have added 15g (60PPM) safely to each bin.  As it turns out 40PPM was not quite enough to stop natural yeast fermentation from starting as both bins had begun a light fermentation.

At 5:30pm on Sunday, I took the final readings to see if the must was ready to ferment.

I decided that no tartaric acid needed to be added, and that although I shoot for a pH of 3.5 I didn’t want to create acid problems by adding anything that could bring pH down slightly.  It is still within the 3.0 to 4.0 required for fermentation to work properly. So… I added 40g of FermAid, and 24 packets of Pasteur Red yeast to each 1/2 ton.  I also added 1.5 lbs of french oak chips to each bin.  The chips were a 75%/25% mix of Medium Toast and Heavy Toast chips respectively.

I’ll begin punch-down of the crown starting tomorrow morning, and will do it 2-3 times each day until fermentation stops.

I am very excited about this vintage, and how it will blend with some of my weaker Cabs to enrich the color and flavors.  Check back for updates as I progress through fermentation, pressing, racking and making this and all my other vintages.

If you accept this notice, your choice will be saved and the page will refresh.