On Sunday, June 26, 2011 – while working in the yard, I had an allergy reaction and began sneezing repeatedly. It was hot and I was miserable so I wrapped up what I was doing and went in for a shower and some allergy medication. I then went outside to join Jim for some sunning by the pool. As I lay there I could see spots like pepper all over my field of vision. With a little checking I discovered it was in the left eye only. I found it odd, but wasn’t too alarmed because I had seen “floaters” in my vision before. 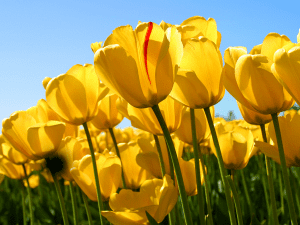 By 6pm I noticed what looked like flies flying everywhere, and quickly realized the pepper-like floaters had grown to be fewer, but much bigger and told Jim what I was seeing. By late evening I saw a dark spot in my lower left field of vision, like you see in the photo.

By the next morning that spot had grown, and I thought I had better see my Ophthalmologist. The soonest I could see her was late Monday evening in Vallejo (30 minutes from Napa).

She did a thorough exam and told me she saw a retinal “hole” – this is a type of retinal detatchment. She said she could perform laser surgery around the hole to stop any of the vitreous fluid in the eye from leaking behind it and causing further detachment, but this was effective in 50% of cases and the hole was very small so it could heal on its own without the surgery. I opted to wait and see what happened before having the surgery.

The vision seemed to be about the same until Friday morning, July 1, 2011. When I got up in the morning there was more diminished vision in the lower part of my eye – like a small hill growing up from the bottom of my vision. By Noon it had grown up like a volcano so that it looked like the bottom part of the next photo. 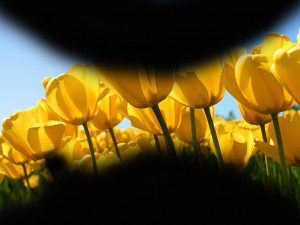 It was a crazy busy day wrapping up for the long July 4th holiday weekend, and I could call the doctor until 4:30. My doctor would wait at the office until I arrived, and Jim took me to Vallejo to see her.

In the exam she said the worst scenario was happening and the retina was detaching, and that I needed emergency surgery, but the retina specialist in Vallejo was not available because of the long weekend, and found the “on call” specialist was in Santa Clara (2 hours from Napa), and could not see me until the next day.

Saturday morning, July 2nd, my vision had deteriorated further – I had lost vision in the top part of my field (like the photo). Jim took me to Santa Clara, where the retina specialist said I needed emergency surgery to prevent the detachment from reaching the macula (where the optic nerve takes the vision impulses and sends them to the brain).

He gave me three choices of surgery, and we agreed the Vitrectomy was the best option. He needed to gather a surgical team, which took several hours on the long holiday weekend. In recovery, after the surgery, he told me that when he got inside he discovered five tears that needed repair, and that I was lucky to have had the surgery when I did – or may have been partially or fully blind in that eye.

He filled the eye with a gas bubble and gave me instructions to remain face down so the bubble would push against the back of the eye helping to hold the retina in place until the gas dissipated. That was the worst part of all!!! Thanks to Jim for setting up a massage table so I could look through the face hole and watch movies on my iPad. It took 13 days for the gas bubble to disappear, so I was suck there for almost 2 weeks – while nurse Ratchet (Jim) only let me get up long enough to eat and bathroom – GRRR. Thank you, Jim, for help me save my vision.

I was blind in my left eye until the gas bubble dissipated (12 days), and began to see again slowly from that time until now. Today is September 29, 2011, and I can see almost 100% of what I saw before the event began for a good part of the day. The eye is still slightly dilated so I have to wear sun glasses ALWAYS, and I don’t see 20/20 all the time (often 20/40 or 20/50 when my eye is tired). The doctors tell me I’m lucky – most surgeries as major don’t have outcomes as good as mine. I have also been told it could take 6 months before I’m fully recovered – and to avoid activities that may cause interocular pressures to elevate.

I will have one more laser surgery to help reduce the pressures so I don’t have to continue eye drops to help keep them down.

I am grateful, and again, reminded that my sight is precious – and not to be taken for granted. Take my experience to heart if you see floaters or diminished vision – SEE YOUR DOCTOR IMMEDIATELY.