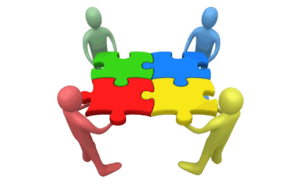 As the Raider’s Stadium rises up in Las Vegas, I often get asked, “Are you a fan of the Raiders?” My response is always: “No, I am not a fan of any competitive sport because I believe the only competitor I have is myself. If I can focus on making myself better at whatever I choose to do – even if it is not enough to make the team win – it is still a success because I beat my personal best.”

It’s interesting to hear the responses I get to that answer. I quickly make it clear that I realize I am in the minority for this philosophy. I would never want to impose that belief on anyone else. I believe there is great value to people who are fans of competition for sports and sales teams. It is often a great incentive to a person to know that if he or she pushes himself or herself to go beyond any self-limiting belief. “Winning” a reward for doing so, is not only powerful for that individual but for the team or for a business to grow.

I want to clarify my thinking behind this philosophy of “non-competition with others” in the hope that it may shed some light on my belief. I think that everything that comes to me in this space called “time” is created by my intention. I do believe in “team building”, which is often a very important part of sports teams. I also want to point out that I enjoy watching my family and friends get excited while watching a game, while I have no interest in watching the game itself.

Where the Philosophy Began

This philosophy started in grade school (K-12) because we were required to attend PE (Physical Education). Being the observer of human behavior since I was very young, I watched the faces of my classmates as the selection process occurred. The coach usually picked the most “active” players or the most “eager” persons to be the captains, who then selected each team member from the rest of us. Of course, the captains picked their closest friends and best players first – Then others until there were a few who were clearly uninterested in the sport but had to be there because PE was required of almost everyone. It was interesting how I seemed to fall in the middle of that selection group most of the time, but felt the awkwardness of selecting the “unwanted” last team members.

This process made an impression on me, and I quickly learned that “team sports” were not nearly as desirable as “track & field” sports were for me. I excelled in the 440 yard dash and the hurdles, and won my High School letters in sports doing those rather than become part of the Football, Basketball or Softball teams. I also found that the team dynamic at my High School inhibited personal growth for some of my classmates until later in their lives. Yes, there was a “Track Team”, and I was part of it, but I was honestly more interested in my personal wins. I knew it would benefit the team if I did better each time I ran.

The end result is so slightly different that most will not see it without asking questions like these:

On my YouTube channel you can find a 6 minute video of My mentor, Dr. Wayne W. Dyer, who told “The Shaya Story”. It is my hope it may help you understand my philosophy on this post.